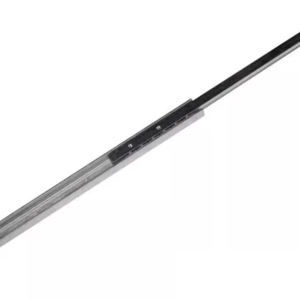 ... Reinforced 2 beams anodised aluminum slide, offers a partial extension. Strong, it encloses reinforced ball bearings that restricts twisting of the beams. It is intended for medium loads in applications requiring a strong ...

... alternative to linear rails. Each rail can only include one moving beam. Options R53G Standard Applications This telescopic slide is designed for medium loads in applications requiring a very ... 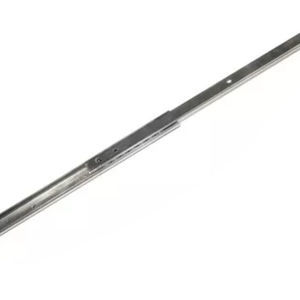 This 2 beam stainless steel telescopic slide, offers a partial extension. Its design is simple, sliding action soft and noiseless. Very compact, it is intended for medium loads in applications requiring ... 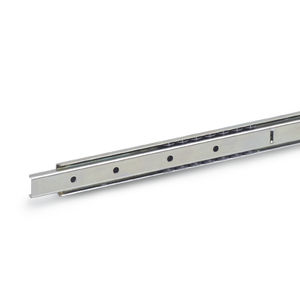 Telescopic slides GN 1400 are installed vertically and in pairs. The stroke reaches ≈ 75 % of the nominal length l1 (partial extension). With type A without rubber stop, the end stops are made out of ... 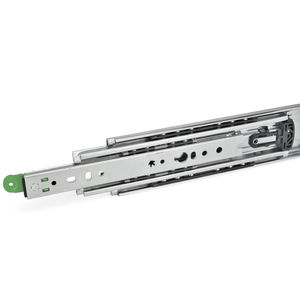 Stainless Steel-Telescopic slides GN 1460 are installed vertically and in pairs. The stroke reaches ≈ 100 % of the nominal length l1 (full extension). The telescopic slides ...

FULL EXTENSION SLIDE (For Heavy Duty) Features ●Full extension (3 members). ●The drawer can be held in fully closed position. [Remarks] ●Some parts of this product are made of plastic. ●The head of mounting screw ...

FULL EXTENSION SLIDE Features ●Full extension (3 members). ●The drawer can be held in fully opened position. Released by lever operation. ●The drawer is detachable by lifting the lever. [Remarks] ●Be sure to read ...

FULL EXTENSION SLIDE Features ●Full extension (3 members). ●The drawer is detachable by lifting the lever. ●The drawer can be held in fully opened position. [Remarks] ●Be sure to read the “Cautions” . ●Some parts ...

... capacity of the telescopic slides indicates the maximum load rating of a vertically mounted slide pair when the entire extension length is used. The specified load-bearing capacities ... Telerace Telescopic guides with ball bearings Product Description The Telerace family consists of telescopic guides made of steel or profiled metal sheeting, treated with a deep nitriding and black ...

TELESCOPIC RAILS Nadella telescopic slides are available in different versions, which are classified according to their extension ratio and their load capacity into part extensions, ... 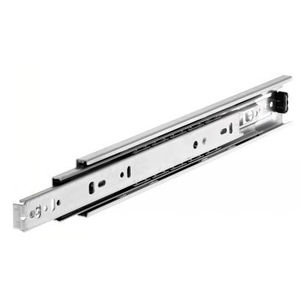 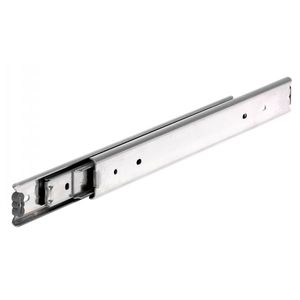 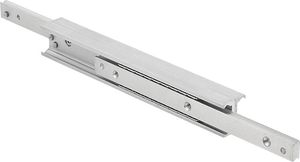 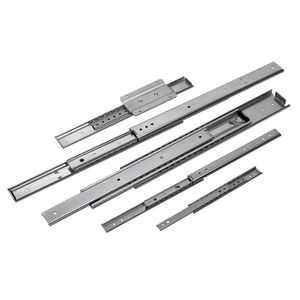 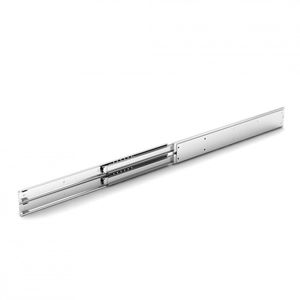 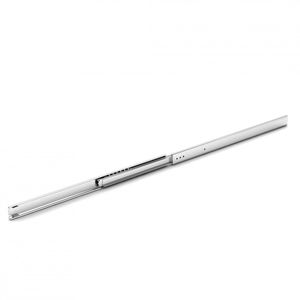 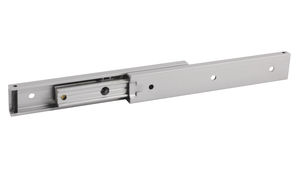 NEW FOR 2015! ENGRENAGES HPC has widened its range of telescopic glide rails by adding a miniature version suitable for use in smaller pieces of furniture. General Characteristics: - Manufactured from aluminium - 3 ... 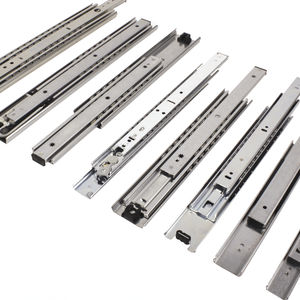 ENGRENAGES HPC now offers a complete range of telescopic slides that can be used in many industrial or commercial drawer applications (such as electronic cabinets, test benches, automatic dispensers for ... 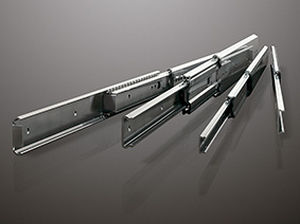 The Slide Rail is a low-priced limited-type linear guide made of steel plate precision-formed by rolling. Thin, compact and easy to install, this product is suitable for linear guides for various applications. 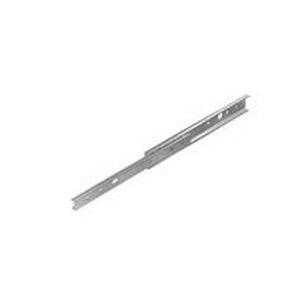 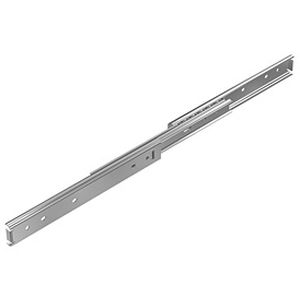 Double Slide This model is a 2-stage, double-unit type whose stroke length is allowed to exceed the overall length. 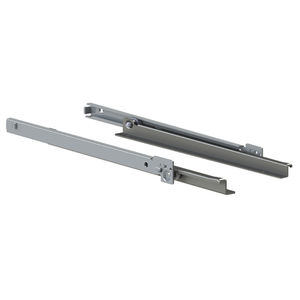 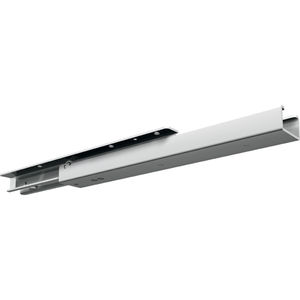 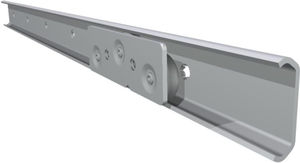 ... the features the slide is equiped with, and how it is mounted. Slides are usually mounted sideways so all data concerning load-capacity will be given for sidemounted use. For information about the load ... 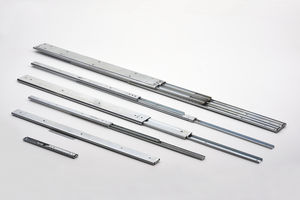 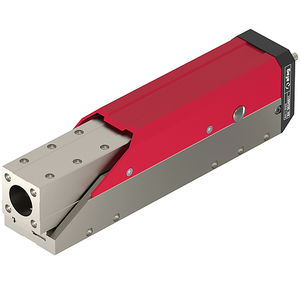 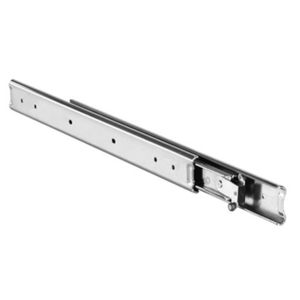 Designed for use in supply carts or installations that require interior and exterior access such as drawers or trays used at a drive-through pharmacy or bank. Two-way travel and full extension. Load Rating: 100 lbs. Full extension ... 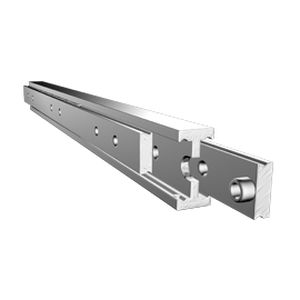 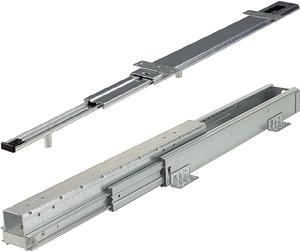 A telescopic slide extends to allow a drawer to be opened or to guide the movement of a heavy element not exceeding its load capacity.

These devices usually consist of three tracks made of stainless, electro-galvanized or anodized steel, or of aluminum. The nested rails slide within each another on ball bearing wheels or slider belts. Other models use recirculating ball bearing units or ball cages.

Runner extension is partial or complete. Those with two-way travel can be opened from either side. Set positions are stabilized by track configuration, which includes stops. Drawer opening can be facilitated by a reverse release mechanism and its closure can be cushioned. Vertical, or guillotine models have springs to counterbalance the load.

Choice depends primarily on maximum slide extension, expressed as a percentage, and on maximum load capacity.

Extend the search
Search by manufacturer
Average score: 4.1/5 (27 votes)
With DirectIndustry you can: Find the product, subcontractor or service provider you need | Find a nearby distributor or reseller| Contact the manufacturer to get a quote or a price | Examine product characteristics and technical specifications for major brands | View PDF catalogues and other online documentation
*Prices are pre-tax. They exclude delivery charges and customs duties and do not include additional charges for installation or activation options. Prices are indicative only and may vary by country, with changes to the cost of raw materials and exchange rates.
Compare
Remove all
Compare up to 10 products